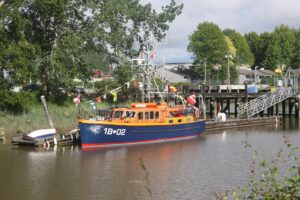 Her Majesty Queen Elizabeth II Platinum Jubilee was honoured by the Delta Lifeboat. The vessel lay dressed overall in Ladner harbour. It must be remembered the Royals have long been strong supporters of lifeboat services in many parts of the commonwealth. CLI hosted the Duke of Kent (then president of the RNLI) in 2000 for the rededication of the Roberts Bank Lifeboat.

Both FRASER and DELTA Lifeboats conducted safety patrols over the long weekend from 20-23 May 2022. As this was the first long weekend of the boating season we expected it to be fairly busy.

Lots of commercial traffic was observed on 20 and 21 May, with kayakers and very few pleasure boaters out.

On 23 May the Delta Lifeboat responded to a PAN PAN call from a pleasure craft that ran out of fuel off buoy S6 in the Fraser River. It was determined a tow was required to the fuel dock in Steveston as commercial assistance was refused.

Overall, it was a fairly quiet long weekend and we were happy to render assistance where required.

The CLI participated in the National Day of Mourning on Apr 28 at the Fisherman’s Memorial, located in Garry Point Park. This memorial remembers those who used Steveston as their base and passed away pursuing their fishing careers.

After receiving our yearly Transport Canada PCCC training in January 2022, the CLI participated in their first PCCC of the year; and for some crew members their first one ever. CLI crewmember D. Maxwell organized this yearly event for the Royal City Yacht Club which included a company that inspected (and sold for $700) fire extinguishers, expired flare collection, a swap meet, and a potluck.

The 14 vessels and their owners that participated were very well prepared as it was not the first time they were doing this. Most owners had all the required items ready for inspection. All vessels complied with the checks and received their annual decal.

Due to the variation of vessels and owners, the CLI crew members who did the inspections learned a lot. The CLI also received $720.00 in donations and we look forward to next year’s event.

If you require a safety check for your pleasure vessel, we do them free of charge. Please feel free to contact us to arrange one, or check our PCCC page of this site to see if we have any scheduled events you can attend.

With the easing of COVID restrictions, the West Vancouver Yacht Club was able to hold its annual classic Southern Street Yacht Race. WVYC requested CLI give safety and communications support for the race and so the Delta Lifeboat transited to Fisherman’s Cove on Thursday, April 14 with a crew of 7 where they were treated to dinner and attended the pre-race meeting.

Following breakfast, on good Friday the lifeboat transited to Dundarave pier where she came to anchor for the start. Ashore CLI volunteers erected the tent and engaged many of the spectators who had come down to view the start.

At 10:30 the first division crossed the line en route for their first turn mark at Sisters Islands. The other divisions followed in order to race over long, medium, short and inshore courses.

After weighing anchor, the Delta L/B set course for Sisters Island keeping pace with the leaders in a rising southeast wind and sea. Monitoring radios and keeping visual watch kept lookouts and plot busy. Heavy rain showers and a cold wind made the half-hour watch changes even more important for the crew to keep everybody alert and warm. Also, experience was gained in all positions.

Sisters Island was reached at 17:25. The drogue was deployed to reduce drift while hands went to supper while maintaining visual and radio watch. At 19:25 with most of the long course yachts having rounded Sisters, it was decided to cruise slowly to Ballenas Island as both long and medium course yachts would be rounding throughout the night.

Arriving at Ballenas Island at 21:20 it was decided the best plan of action was to anchor on the east side where a visual watch could be maintained out over the Gulf. The crew went into an anchor / communication watch enabling the off-watch crew to sleep.

At 03:50 on Saturday morning a call from Race Control alerted the lifeboat that a MOB beacon was being received. Calling all hands the beacon’s GPS position was plotted and JRCC was advised who declared a Mayday.

Delta L/B weighed anchor following a quick briefing and proceeded to the last known position. At 04:35 JRCC stood Delta L/B down as it was determined the MOB beacon had been accidentally activated and all crew of the yacht ‘Intuition’ were safe and accounted for. Delta L/B returned to the previous anchorage.

Following colours and breakfast, Delta L/B weighed at 08:10 and proceeded at slow speed to track the races tail end boats. After coming up on them it was decided to travel back with them to the finish line.

The winds during the night had switched to the N.W. varying between 10-20 knots now with heavy rain clouds over various parts, bright sunny periods were experienced.

At 13:37, while sailing south of Keats Island, the lookouts reported a RHIB adrift. Closing to investigate it appeared to have broken adrift because the painter was in the water. There was no outboard or oars and nothing but a bailer inside. JRCC was advised and being sure this was not a MOB situation the RHIB was hauled aboard where an investigation showed it was from Bellingham Washington. However, an identification plate marking had been etched out.

Continuing onto Point Atkinson Delta L/B stood down from race duties and proceeded south to the Fraser River taking green seas in and 18 knots northwesterly.  Delta L/B secured at its lifeboat station 173:7. The crew all performed well maintaining the watch system for 34 hours. Grateful thanks were received from the race committee and Don Smith at Coastguard radio.